Diandra Forrest graduated from NYISE in 2007. She is remembered for having the dream, while in high school, of wanting to be a model. Today, she is a top rated African American fashion model and she has a condition called albinism.
. 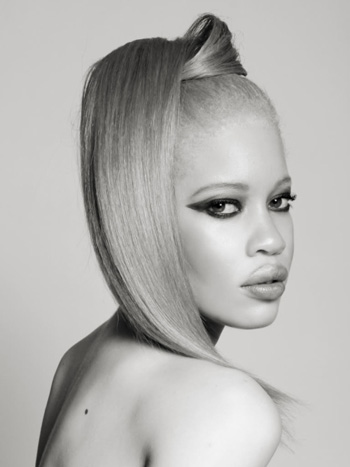 She was teased as a child in public school for her unconventional beauty.   Approximately one person in 17,000 is born with albinism, while black people with albinism are even more rare. She came to the NYI in the 5th grade and found an environment, where she could thrive and work on fulfilling her dreams.
Diandra Forrest was born in the Bronx, New York on October 22, 1989 and she is not the only person with albinism in the family, her brother has the same condition, He also attended the school. In her school yearbook, one teacher had this to say about her:
"I will always remember you Diandra for your sense of responsibility, for your hard work in the classroom, and for your sweet, melodious soft voice which is a true reflection of your soul. I will treasure your motherly love and protection toward your baby brother, Raymond… I will always see the tall, slender figure of you as a beautiful young lady carrying yourself so properly and elegantly in the school building. I will miss your greetings, hugs and kisses even when we simply met in the school hall. I will treasure the memories of a great young lady who always exemplified distinction and class in the simplicity of her everyday routine, never imposing your views, but carrying on the task needed to be done with dignity and nurturing motherly love, especially toward the small children of the Schermerhorn Program."
She spent seven years at our school and in her yearbook she was asked "Where do you see yourself in 10 years?" to which she prophetically replied "walking the runway of a Victoria’s Secret fashion show".
Diandra first joined Elite Models NY. It was the first time an albino model had ever signed to a major modeling  agency. Suddenly, the fact that she was different became her asset. Since then, she has moved to Krush Model Management NY.
Diandra has become  a regular fixture at fashion shows. She has been in numerous national and international fashion shows and graced the cover of several magazines, including a recent issue of Ebony. She has appeared on the Tyra Banks Show and in a TED presentation in which she discussed her personal experiences of growing up in the Bronx. She has appeared in several music videos including Beyonce's Pretty Hurts and Kanye West's Power.

Models Talk: Racism, Abuse and Feeling Old at 25 https://nyti.ms/2x790fK  via @nytvideo Diandra is a graduate of ours. We are proud of her.