This article appeared in the school newsletter called Pelham Progress on June 21,1941.
Juana Hagadorn: 91-Year-Old Former Student Listens To Students At Play and Recalls When She Was One Of Them

By Robert Price
Juana Hagadorn Never Learned Braille Because "It Is Too Complicated. And I Don't Like It"; She Prefers Moon Type 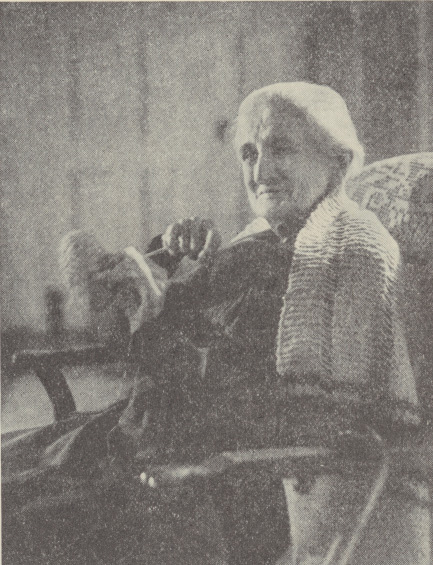 Ninety-one years old and still kicking and getting a joy out of life that few experience ! That is Juana Hagadorn, the oldest living former student of The New York Institute for the Education of the Blind. Today, after a life rich in service, she sits in Peabody Home just across the street from the Institute where she can hear the students laugh in their play and recall the days when she was one of them.

Miss Hagadorn entered The New York Institute for the Education of the Blind in 1861. At that time the school was located at Thirty-fourth Street and Ninth Avenue, and the principal was Robert G. Rankin who was succeeded by William B. Wait in 1863. When asked to compare the school of today with the school as it was when she was a student, Miss Hagadonn said that she could not recall anything that would be of particular interest. "When I went to school," says Miss Hagadorn, "we did not read Braille. I studied Boston type, which was a system of reading made up entirely of raised, non-capital letters. Then I learned Philadelphia type which was a system of raised capital letters. When Moon type was adopted, I mastered it. We were also required to know New York Point, which is quite similar to Braille. I have never learned the Braille system because I think it is too complicated and I do not like it." So saying, she took from a shelf a couple of volumes written in Moon type which she reads today.

She is of pure Dutch ancestry, her forbears coming to this country shortly after the landing of the Pilgrims and settling in New York State. Juana was born in Stapleton, Staten Island, on August 1, 185o; her mother lived until the daughter was two years old. Her father was editor of the Staten Island Courier—later becoming editor of the Syracuse Courier, after the family had moved to that city. In 1862, he enlisted and entered the Civil War on the side of the Union. During the course of the war he was sent to Venezuela to prevent the shipment of arms to the southern forces.

Later he became a brigadier general in the regular United States Army. When her father came back from Venezuela he was stationed in Baltimore. Therefore, he removed his daughter from the New York Institute and placed her in the Maryland School for the Blind where she graduated from high school. Miss Hagadorn's favorite subjects were history and geography; and even today she can recite from memory all the countries and divisions of the seven continents of the earth. "I am having a pretty hard time keeping Europe straight, though," she chuckled. "When I was at the New York school I enjoyed very much having my grandfather come and take me out during the week-ends. Being allowed to go out with relatives was one of the few privileges which the students had when I went to school. The students of the New York Institute today certainly have a wonderful school-life compared with that which we had during my school days." Miss Hagadorn has visited the school grounds several times and thinks they are very beautiful.

After having been graduated from the Maryland School for the Blind, Juana Hagadorn led a very interesting life. She took a keen liking for work with the deaf-blind and studied under the famous Dr. Gallaudet. She learned all the methods of communicating with deafblind persons and received a certificate of recommendation from Dr. Gallaudet which qualified her among the best in the field at that time. This certificate is now hanging on a wall in Miss Hagadorn's room along with other diplomas. Dr. Gallaudet sent her all over the United States to tutor the deaf-blind. At one time, when she was in Washington, D. C., Miss Hagadorn prepared eight pupils for Gallaudet College.

Miss Hagadorn, totally blind, has lived in Peabody Home for Aged Women for twenty-four years, and with her radiant personality has been a real influence among her associates there. She finds contentment and great satisfaction in re-living her rich experiences gained from her self-sacrificing service in the field of the exceptional. To her the matron of the home is just another "ray of sunshine" and her nurse is a "Good Samaritan." Would that every student passing through the doors of the New York Institute could build such character that he, too, at ninety-one might find this rare richness in life that Miss Hagadorn enjoys.