Robert H. Whitstock (1930-1998) was born in New York City and attended the New York Institute for the Education of the Blind. He received a B.A. in political science and history from Hamilton College in Clinton, New York, graduating third in his class in 1952. He was a member of Phi Beta Kappa Honor Society. He graduated from Harvard Law School in June, 1955 and passed the New York bar the following month.

Robert H. Whitstock taught high school social studies at the New York Institute for the Education of the Blind. He joined The Seeing Eye in 1957 as Administrative Assistant, serving as the principal field representative. Eventually he became a vice-president of The Seeing Eye and worked for them until his retirement in 1992. 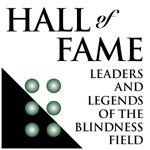 Robert H. Whitstock served as President of the American Association of Workers for the Blind (AAWB) from 1973 to1975 and served on the national board as a past president until 1977.