History of Pelham Parkway » History of Our Local Streets

History of Our Local Streets

This station was originally opened on May 29, 1912, as an express station of the New York, Westchester and Boston Railway, with two island platforms and four tracks. The commuter line went bankrupt in the depression, this station was built specifically by the New Haven Railroad to deliver passengers to the Morris Park Race Track. A four mile stretch of the railroad was acquired by New York City Transit in 1941 and became part of the #5 Dyre Avenue subway line.

Morris Park Racecourse was a thoroughbred horse racing facility from 1889 until 1904. The 360 acre race track that was closed when the racing organization purchased land to develop a new race track that is now called Belmont. Morris Park hosted the Preakness Stakes in 1890. John Albert Morris owned the track site and was used for automobile racing until New York City took ownership of the site in 1907. In 1908, The Aeronautical Society of NY, the first flying club had a facility at the racetrack. As late as 1921, the clubhouse was intact until it was sold to a factory to manufacture ornamental iron. 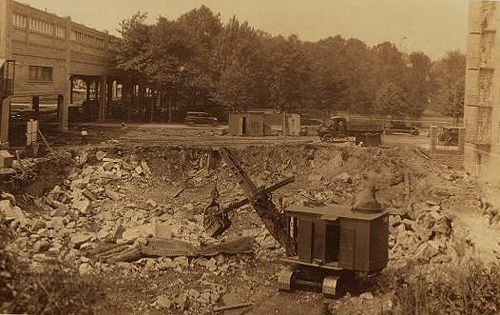 Construction site near the elevated trains at White Plains RoadBuilt in 1916, the Pelham Parkway Station is part of the #2 White Plains Road subway line. This station is unique within the New York City Transit System in its appearance and siting and has been cited for these features by New York State's Office of Parks, Recreation and Historic reservation. The structure, decorated with tile work patterns and banding set into concrete facades, spans Pelham Parkway's greenbelt making it an imposing piece of civic architecture. It is the only station within the NYC Transit System that is built over parkland. 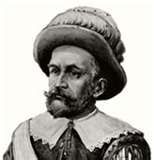 Allerton is a working class neighborhood geographically located in the east Bronx borough of New York City in the United States. It is named in honor of Isaac Allerton, a passenger on the Mayflower, who is listed at the memorial at Plymouth Rock. 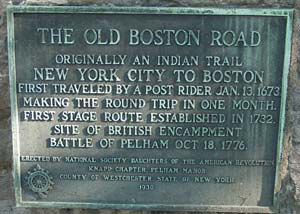 Boston Road Marker located in Pelham, NY. Reads as follows: The Old Boston Road, Originally an indian trail, New York City to Boston, first traveled bya post rider Jan. 13, 1673, Making the round trip in one month. First Stage route established in 1732. The Boston Post Road was a system of mail-delivery routes between New York City and Boston, Massachusetts that evolved into the first major highways in the United States. The Upper Post Road was originally called the Pequot Path and had been in use by native Americans long before Europeans arrived. Some of these important native trails had seen so much traffic over the years that they were two feet below the surrounding woodland. The colonists first used this trail to deliver the mail using post riders. The first ride to lay-out the Upper Post Road started on January 1, 1673 . Later, the newly-blazed trail was widened and smoothed to the point where horse-drawn wagons or stagecoaches could use the road.
--