History of Writing Codes for the Blind » Louis Braille 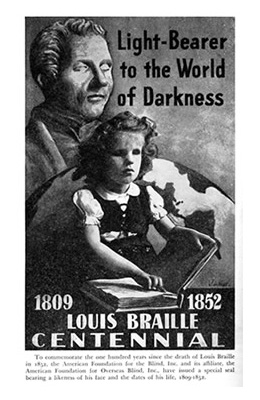 Quoted from: Uniform Braille System by William Henry Illingworth, Esq. Headmaster of the Royal Blind Asylum and School, Edinburgh, Scotland. Read at a London Conference of 1902.

Louis Braille was born on 4th January 1809, at Coupvray, near Paris. At three years of age, an accident deprived him of his sight, and in 1819 he was sent to the Paris Blind School-which was originated by Valentin Hauy. Here he made rapid progress in all his studies. He learned to read by embossed Roman letter, which was exclusively used at the time and which continued popular for fifty years in that country and our own, and is still used in many schools in America.

In 1826, now a promising organist in a Paris church, Braille was elected Professor at the Institution. Both as pupil and teacher he spent most of his leisure trying to find a system by which the blind could write in relief.

One which had been invented by M. Barbier appeared the most promising. M. Charles Barbier was an officer of Artillery, who, being rich and philanthropic, was interested in the blind, and did what he could to promote their education. In 1825, he suggested embossing by means of a point method, the character containing 12 dots, 6 high and 2 wide, arranged in a rectangle The character thus obtained was large and unwieldy, though capable of an almost unlimited number of combinations. 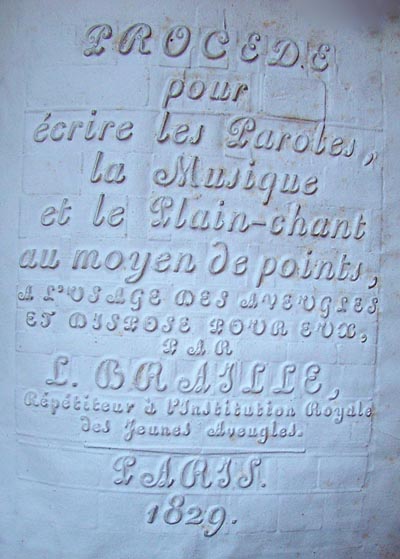 Louis Braille cut Barbier's character to two and thus produced his well-known 3 by 2. On this basis Braille was the first who devised a practical scheme for printing and writing in tangible form, suitable to the tactile capacity of all. This was in 1829.

As this image from RNIB of his 1829 publishing of his code shows, his original alphabet involved the use of a horizontal rule and it was eliminated from the alphabet.

After some slight modification, it reached its present form in 1834, and is the system which has since borne his name. We do not find, however, nor does it appear, that Louis Braille, in arranging his system, paid attention to any other considerations than one, namely the methodical arrangement of the letters of the alphabet.

For my own part, I must candidly confess I have a strong leaning to the 'American Braille' arrangement, root and branch--the contractions, like the letters, being carefully and scientifically planned. Nearly one half of the letters of the alphabet are the same as our own, so that the labour of learning it by those conversant in English Braille would be very small.

The period 1825 to 1835 appears to have been a period of universal activity in matters relating to embossed literature and printing. In Britain, we has Gall, Alston, Moon, Fry, Frere, and Lucas, all bringing out their own peculiar types, and each having his own partisans. In America, there were Mr. Friedlander, Dr. Howe, and others.

About 1859 or 1860 the Braille system was introduced to America and was taught with some success at the St. Louis School for the Blind. In 1868, the British and Foreign Blind Association came into existence and having brought Braille into this country, gave to it a powerful impetus by printing and disseminating books in that type. 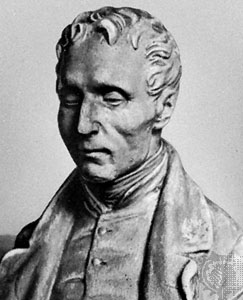 It will be seen that both in England and France there was, even at so late a date as 1878, considerable diversity of opinion as to claims of Braille as the best method of reading and writing for the blind.

In America the same thing occurred. William Bell Wait, of New York, inventor, or perhaps the perfector of New York Point type, tells us ..."the merits of the Braille system were recognized chiefly by a few blind persons who were engaged in teaching. It was proscribed as being arbitrary on the ground that it was unlike the ordinary forms of letters."

Editor's Note:
New York Point was more widely used than anyone remembers. Mr. Wait advocated NY Point as superior to both American Braille and British Braille. According to Robert Irwin in his book "As I Saw It" (1955), this "War of the Dots" divided the schools of the blind into two camps for until the issue was finally settled around 1916. One that used NY Point and another that advocated American Braille. The war was lost by both sides because the British stood by the braille code it was using. Ultimately, the wealth of code already available in the British Empire and the desire for a unified English language code lead to the acceptance of the Braille code we use today.